The last few decades have seen a growing interest in genealogy in Finland, resulting in plenty of family societies being created. The Tissari Family Society was formed in 1981.

The earliest written knowledge of the family tree comes from the late 16th century Kangasniemi, a municipality located in the western side of the Southern Savonia Region, Finland. Kangasniemi has been declared the historical cradle of Tissari family, i.e. it's where most of the people of Tissari heritage used to live. From there the Tissari families spread at first to Pielavesi, a municipality in the Northern Savonia Region, and its neighboring parishes.

Two books have been written about Tissari family. The first book, written in 1986 by Jorma Tissari, contains the earliest chapters of the family from the 16th to 18th century. Raija Järvenpää's 2002 book deals with the Pielavesi branch of the family, descendants of Matti Matinpoika Tissari, an 18th century soldier. Now a third book is about to be published and it deals with the Kangasniemi branch of the family from the late 16th century to present day. The new book should come out in early 2016.

Nowadays there are members of Tissari family living all across Finland and even beyond its borders. Some emigrated to the United States and Canada over a hundred years ago. Yet very little is known about the stories of these emigrants to the new continent. Therefore we'd hope to find descendants of some of those immigrants who would be able to help us advance the Tissari genealogy research with their knowledge. Reciprocally, we could possibly be able to provide said descendants some knowledge of their ancestry and relatives living in Finland. You can contact us either in Finnish or English via email at tissari.sukuseura@gmail.com. Interested parties are invited to visit the rebooted website of the Tissari Family Society at www.tissarinsukuseura.net.

Advertisement by Finland Steamship Co. for traveling between Finland and the Americas. Appeared in a 1913 wall calendar by Väkäleuka.

A postcard sent from USA to Finland in 1913. The postcard depicts the SS Arcturus, a steamboat which carried many emigrants from Finland to America. The original owner of the picture: Arlene Tervakoski.

Emigrants in front of the Emigrant Hotel of Finland Steamship Company in Hanko, Finland, in the beginning of the 20th century 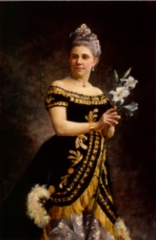 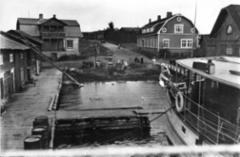